Born: Vienna 14 September 1883, less than three weeks after his parents married. Despite his father being Jewish, Richard (left), aged perhaps 18) is raised as a Catholic after his mother’s faith.

Father: Emil Gerstl (left), Jewish (baptised Catholic 1904), born Neutra, 1834, died Vienna, 20 October 1912, apparently financially comfortable from dealings on the stock exchange and, despite his misgivings, supported Richard as an artist throughout his life.

Mother: Maria, née Pfeiffer (right), Catholic, born Kaplice, 1857, married 26 August 1883, died Vienna 3 January 1910. Converted to Judaism in August 1883, but remained in the faith for little more than six months. Loved Richard very much and offered much moral support in his artistic activities. She was probably the dominating force in the family.

1898 – 1901: Family home – Pichlergasse 1, Wien IX (there is a possibility that the family moved briefly to Spitalgasse 27, Wien IX in 1899, but this is not been confirmed by Gerstl’s Meldzettel i.e. registration of address)

July 1901: Leaves Griepenkerl’s class at Akademie, possibly ejected by his teacher with whom Gerstl has a confrontational relationship

Autumn 1902 – Summer 1904 Studio: Therese-Krones-Haus, Hohe Warte 37, Vienna IXX (left). Whilst there he discovered Weininger’s Geschlecht und Charakter almost as soon as it had been published in June 1903, read Ibsen and Wedekind and became self-taught to a high proficiency in Italian and Spanish. In addition, he and Hammer attended a a private art school on Kohlmarkt, Vienna I, run by two Secessionist painters, Franz Hohenberger and Ferdinand Kruis.

Autumn/winter 1902/3: Gerstl paints his first important self-portrait, Selbstbildnis (Akt auf blauem Grund) (right) one ofGerstl’s Works, 1902-1905, a phase that covers the time from Gerstl’s exit from the Akademie in summer 1901 to the end of his second spell in Griepenkerl’s class in 1905. Gerstl’s closest friend Waldemar Unger, described this as their Sturm und Drang period. It certainly appears to have been one during which Hammer claimed that both he and Gerstl painted nude self-portraits in Therese-Krones-Haus in front of the same mirror, and that, as young men, sexual matters were, perhaps unsurprisingly, of considerable importance to them.

July 1905: Completes basic education at Allgemeine Malerschule and exits, or is possibly ejected once more, from the Akademie

Winter 1905: It is probably around this time that Gerstl seeks composers and subjects and apparently approaches Mahler in the street and offers to paint his portrait. Mahler, though, demurs.

May 1906: Gerstl invited by Schönberg (left) to enter his house to teach him and his wife, Mathilde, to paint. Gerstl almost immediately paints Schönberg’s portrait, presumably satisfying his desire to depict a composer, and then Mathilde’s, too. These comprise just two of Gerstl’s portraits from the period from early 1906 – June 1907 during which the artist became a confirmed member of Schönberg’s circle.

March 1906 – September 1908: Education – Prof. Heinrich Lefler’s Systemisierte Spezialschule für Landschaftsmalerei, Akademie der bildenden Künste, Vienna. Lefler, who had seen and been impressed by Gerstl’s Die Schwestern Fey, which was hanging in Hammer’s studio, persuaded Gerstl to join his class and, in return, provided Gerstl with his own studio, which he lost on being ejected in September 1908.

July 1907: Gerstl is invited by Schönberg to join him and the rest of his circle for their summer vacation in Gmunden, where, in a short period of perhaps 9 or 10 weeks, Gerstl produced a series of plein-air land- and seascapes (left), plus indoor portraits, that saw an extraordinary development in his art and constitute what can be considered the third phase of Gerstl’s creative life (see Gerstl’s works, Gmunden 1907).

February 1908: Gerstl, having had a damaging and eventually irreconcilable disagreement with Lefler concerning Kaiser Franz Joseph’s Diamond Jubilee parade, takes a second studio, located in Schönberg’s tenement building at Liechtensteinstraße 68/70, where he and Schönberg shared the space and materials until they both left for their second joint holiday in Gmunden in June 1908. The period saw Gerstl produce a number of works including both large-scale landscapes and life-size studio portraits (see Gerstl’s works, Autumn 1907-Spring 1908).

Summer 1908: Gerstl follows Schönberg to Gmunden for their second joint summer vacation. Schönberg soon attempts to finish composing his seminal op. 10, Second String Quartet, in which, in the fourth movement, he becomes the first to compose a large-scale atonal piece. Meanwhile, Gerstl spends the first three or four weeks of the vacation to paint an increasingly radical series of life-size, expressionist portraits of Schönberg, his family (left) and others in his group (left) (see Gerstl’s works, Gmunden 1908-Suicide). 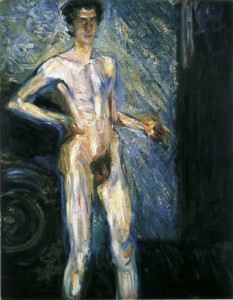 End of August 1908: As the end of their vacation approaches, Schönberg is shocked to discover Gerstl and Mathilde in a compromising situation, possibly in Gerstl’s summer farmhouse. He refuses to listen to Mathilde, who then elopes with Gerstl, firstly staying in a guest house in the main town  to Vienna the next day. The two stay in in a pension in Nußdorf for three days before Schönberg tracks her down and she returns to the family home at Liechtensteinstraße 68/70. Gerstl goes to back to his own family apartment at Nußdorferstraße 35, where he paints a number of works (see Gerstl’s works, Gmunden 1908-Suicide), including perhaps his most astonishing self-portrait, Selbstbildnis (Akt in ganzer Figur) (right) a life-size nude of himself dated 12 September 1908.

October 1908: Gerstl, by now ostracised from his friends in the Schönberg circle and excluded from the Akademie following a vitriolic letter to the Ministerium für Kultus und Unterricht (Ministry of Culture and Education), takes an artist’s studio on the top floor of Liechtensteinstraße 20 (see Gerstl’s Meldzettel für Geschäftslocale), overlooking Freud’s building in Berggasse and precisely a kilometer from the Schönbergs’ apartment. His intentions appear to have been serious as he moved his works and materials in and may have painted Sitzender Frauenakt, a nude with an obliterated face that some have claimed was of Mathilde. This might be so, for, according to her letters to Alois written after Gerstl’s death, she appears to have visited her young lover in his new studio and, despite her reconciliation with her husband, continued her relationship with him.

4 November 1908: Having been convinced by Schönberg’s student and Gerstl’s erstwhile friend, Anton Webern to return to the family home, Mathilde appears to have left Gerstl at around the time that a concert of works composed by Schönberg’s student, from which Gerstl had been pointedly excluded, was taking place on the afternoon of 4 November 1908. It was now that Gerstl, who, according to Hammer, had shown no indications that he was suicidal, probably hanged and stabbed himself in his Liechtensteinstraße 20 studio. He was discovered by a family servant the next day, 5 November, when the cause of death was given by his doctor, Otto Paul Gerber as “Unzurechnungsfähigkeit” i.e. unsound mind.

7 November 1908: Gerstl receives a Catholic burial at Sievering cemetery. Thereafter, Gerstl’s works are gathered into a crate and stored by the family at Rosin & Knauer, a removals warehouse situated on the boundary of Vienna’s 1st and 9th Districts

28 September 1931: Having been introduced to Gerstl’s works by Alois, who could no longer afford their storage charges, Otto Nirenstein (later Kallir) the owner of the Neue Galerie, Grünangergasse 1, Wien I, mounts the first ever exhibition of Gertl’s works.

CHRONOLOGICAL LIST OF LINKS TO GERSTL’S KNOWN WORKS
Click on a link below to either view an individual painting in a separate window or to go to a specific period.

One thought on “A Life in Words”