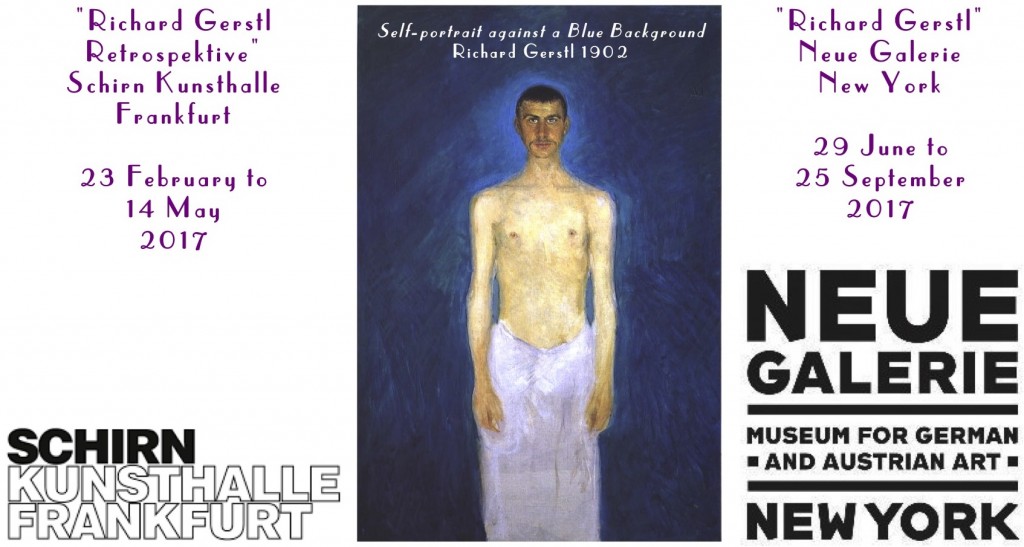 2017 saw two major Richard Gerstl art exhibitions, both effectively based on the doctoral thesis on Gerstl’s relationship with Arnold Schönberg, embedded at richardgerstl.com/thesis-2 and the catalogue of works found in this website.  It is certainly most unusual, if not unprecedented, for museums to base such an extensive retrospective of an artist’s output purely on an academic work and, as the author of this website (and a highly successful ex-artist manager), this is an outcome of my research and life work that was the last thing I expected!

The details of the two exhibition were as follows:

These were major retrospectives of Gerstl’s works, the first for many years, but whilst Frankfurt had the largest number of Gerstl’s works, New York was slightly smaller and perhaps rather more focused on Gerstl’s relationship with Arnold Schönberg. Nonetheless, as can be readily seen from the press reviews and articles published in both Germany (available for download here) and the USA, each show was very well received indeed, and the public and critical response was extremely favourable

I was also hugely honoured to have been asked to write the complete text and chronology for the 72 paintings for the catalogue raisonné. This became the major part of the most sumptuous and generous catalogue published by both the Schirn, in German (click here) and the Neue, in English (click here). Both catalogues also feature several art historical essays, including my own, A Song to the Siren (click the link to view), which tells the story of the Gerstl/Schönberg relationship and Gerstl’s tragic affair with Schönberg’s wife, Mathilde.